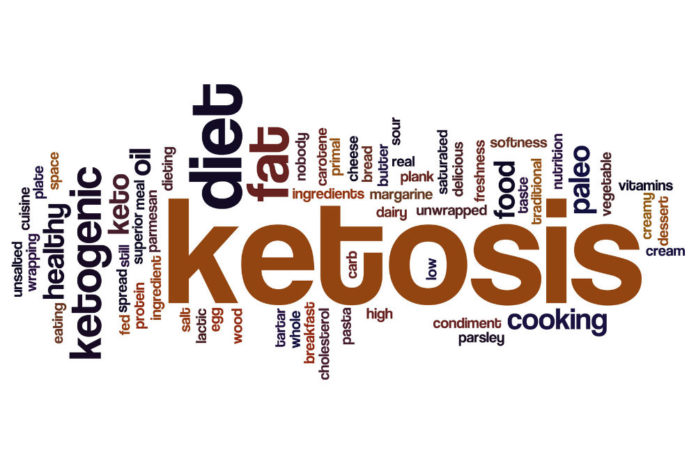 In Part 1 we discussed how the basics of what Ketosis is on a very fundamental level.  Today we will talk more in depth about how ketosis works, and the process of how the body makes ketones.

Ketosis is a state in which your liver breaks down body fat for fuel, the byproduct of which is ketones. This is an energy source for your body similar to carbohydrates (such as breads and pastas) which ultimately break down into simpler forms of sugars.  There are 3 types of ketone bodies: acetone, acetoacetate, and beta-hydroxybuterate (BHB)  [1]. When we first go into ketosis, we start “spilling” the ketone acetoacetate, which is found in the urine.  If you’ve heard people checking to see if they’re in ketosis by peeing on test strips (Ketostix), this is the form of ketone that is being tested.   First, a portion gets spontaneously converted into the ketone acetone (the form of ketone found in the breath) and is then turned into beta-hydroxybuterate (the form of ketone found in the blood and the type your body uses most as a fuel source).

A big part of becoming fat adapted is your body becoming better at making an enzyme called beta-hydroxybutyrate dehydrogenase.  This is a pivitol adaptation that your body makes to better use ketones and fat for energy.  This can take a few weeks, so give it time.  Think about it. If you’ve been a sugar burner your whole life, your body has not had to make much of this enzyme before.  So it’s going to take time.  Much like if you have a broken leg that has been in a cast for months.  You can’t just take the cast off and immediately run a marathon.  It’s going to take time for the bones and muscles to strengthen back up.

Believe it or not, most of the cells in your body can use ketones directly for energy as well or even better than they can with glucose [2].  Yes, there are some parts of the body that require glucose like red blood cells and parts of your brain.  However, your body already comes prepared to meet these demands without taking a single bite of carbohydrates.  Your liver is fully able to derive glucose from protein via a process called gluconeogenesis.  Breaking that word down backwards:

Genesis= Create.  Neo=new. Gluco=sugar.  So using spare protein from diet and general body processes, the liver can convert some of this excess protein to sugar.  This is exactly how hunter gatherer tribes were able to survive in harsh winters when vegetables, fruits, and other plant matter was scarce.  Or how tribes like the Inuit in Antarctica were able to thrive without a hint of dietary carbohydrates [3].  It should also be noted that some tissues like the brain can utilize BHB even better than glucose once adapted (we’ll talk about that more in future articles)

Ok, so we’ve talked about how your body can use fat for fuel, and why you don’t need to eat carbs to live.  Let’s get the next question… WHY would I want go keto?  You can also lose weight by just eating less and moving more right?  I mean, that’s what has been touted as dietary advice for the last 30 years, nevermind the fact that people are getting fatter and sicker in the process.  So what benefits does a ketogenic lifestyle have over that of a sugar burner?  Great question.  Here is a list of documented health benefits from being in a state of nutritinal ketosis:

I will be providing a page for scientific resources in the near future, so if you want to really nerd out on this stuff, feel free.

That’s it for part 2.  Next in part 3 we’ll be tackling some frequently asked questions and debunking some myths you may have heard surrounding the ketogenic diet.

KDP Ep 014: Getting Back to Basics